Teletubbies is a British-American children's TV program that originally aired on BBC (United Kingdom) and PBS (United States) from 1997 until 2001, before spinning-off in 2016. The show centers around four anthropomorphic creatures of the same name who live in an area called "Teletubbyland" and reside inside a huge earth-like dome. The names of the Teletubbies are Tinky-Winky, Dipsy, Laa-Laa and Po. Intended for toddlers aged 1-4, Teletubbies has spread controversy from American far-right conservatives, fundamentalists and other far-right Republicans ever since 1998.

Tinky-Winky: Tinky Winky is the largest of the four Teletubbies. He is purple in color and has an upside-down triangle as an antenna. His favorite item is his red-"magical" bag he sometimes carries around. In 1998, Jerry Falwell, then-chancellor and president of Liberty University, called out Tinky-Winky because of his belief that he was a homosexual and was spreading gay and Liberal propaganda to young children. He thought Tinky-Winky was "gay" because he is purple (the main color of LGBT pride) as well as having a triangle for an antenna (the LGBT-pride symbol) [1].

Dipsy: Dipsy is the second-largest of the four Teletubbies. He is green in color and has a straight, dildo-like, antenna. His favorite item is his white and black hat. Many racist WASPS (mostly White-Rednecks) in the backwoods of The South probably hate Dipsy because he is portrayed as the "black" Teletubby.

Laa-Laa: Laa-Laa is the second-smallest of the four Teletubbies. She is yellow in color and has an L-shaped antenna. Her favorite item is a huge-orange ball she bounces around. Some Conservatives may view Laa-Laa as a feminist, despite her "very feminine nature."

Po: Po is the smallest of the four Teletubbies. She is red in color and has a lollipop-like antenna. Her favorite item is her scooter. Some Conservatives portray Po as a "Communist" due to her portrayer being Chinese. Some believe she is repeatedly saying "faggot, faggot, faggot" while speaking gibberish. However, this was debunked when it was revealed she was saying "Fidet, Fidet, Fidet" which is Cantonese for "Faster, Faster, Faster". 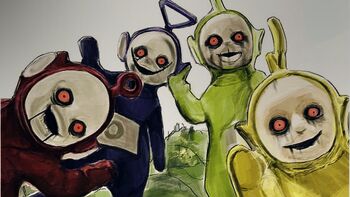 Retrieved from "https://liberapedia.wikia.org/wiki/Teletubbies?oldid=117261"
Community content is available under CC-BY-SA unless otherwise noted.