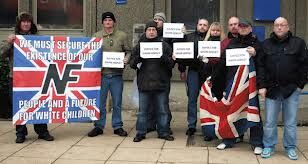 Prejudice is disliking something or being against something for irrational reasons.

In many nations foreigners and immigrants are the victims of prejudice because they're not like us. Still when we go to other nations we become foreigners and we don't like it if the people in those nations turn against us because we're not like them.

The tendency to blame the victim reflects the way Human societies encourage the psychological construction of the OTHER to alleviate guilt. In bourgeois societies ordinary people are encouraged to blame Other races, foreigners, Immigrants, Poor people while selfish rich people work to keep those who might oppose them divided. Among Communists the Bourgeoisie, the Capitalists, a range of Class enemies are blamed for what's wrong in society, especially Poverty.

If we ever contact Intelligent aliens some of us might become prejudiced against them because they will certainly be very different from us. If the aliens are stronger than we are and technically more advanced any prejudice could be dangerous for us.

Retrieved from "https://liberapedia.wikia.org/wiki/Prejudice?oldid=119389"
Community content is available under CC-BY-SA unless otherwise noted.