Liberapedia
Register
Don't have an account?
Sign In
Advertisement
in: People Who Suck, People who break the law, Crime,
and 2 more 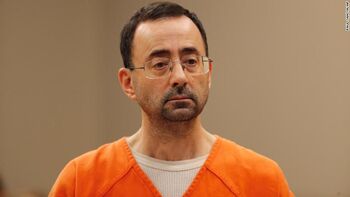 Lawrence G. Nassar (born 1963) is an Lebanese American(This is not a reason to be racist This does not mean Lebanese people are bad like this child molester and former doctor/physician for the USA National Gymnastics Team. He was formerly a physician for Michigan State University. He has been accused and plead guilty to over 25 counts of sexual assault, with as many as 250 women accusing him. [1]

Before this Rapist tried to hurt any more girls or women, he was sentenced to between 40 and 175 years in prison on January 24, 2018. He will definitely spend the rest of his life in prison (He should have been in Prison along time ago )The Honorable Judge Rosemarie Aquilina was noted for her line "I just signed your death warrant" during the sentencing. [2]

On February 2, 2018, during one of the hearings, the father of one of the victims told the judge to "give him five minutes in a locked room with Nassar". After he was denied this request by Judge Janice Cunningham, he lost his temper and lunged toward Nassar in a fit of rage(Larry Nassar deserved it he deserved to be beaten for what he did to hundreds of Girls) . Just before the man reached Nassar, he was restrained by several cops, arrested and escorted out of the courtroom. Although Judge Cunningham stated that violence could not resolve this issue, the man ultimately did not receive any charges of "resisting arrest" or "disorderly conduct" [3].

Some People think He is a Muslim because of his name *His Religion does not matter what Matters is what he did. But He is Roman Catholic , He is a Arab Christian.

He Got married in A Church He married His Now divorced Wife Stephanie Lynn Anderson at East Lansing's St. John's Catholic Church.

He was a catechist at St. Thomas Aquinas Parish’s seventh-grade class and a eucharistic minister at St. John Church . [4] [5]