Franklin Delano Roosevelt (January 30, 1882 – April 12, 1945), often referred to by his initials FDR, was the thirty-second President of the United States, and sometimes considered the greatest President of the 20th Century. Elected to four terms in office, he served from 1933 to 1945, and is the only U.S. president to have served more than two terms.

He created the New Deal to provide relief for the unemployed, recovery of the economy, and reform of the banking systems.

At the age of 39, he was struck with a crippling illness, which at the time was thought to be polio. With later research, his disease was actually in turn, Guillain-Barré syndrome.

He won the 1936 election, in one of the greatest landslides ever, earning all but two states (Vermont and Maine, which, strangely, are usually 2 of the most intelligent states. They would both like to apologize), and won 523 electoral votes to 8 electoral votes.

FDR was President during World War II and mobilized the nation for war and is credited for this. However, his decision to imprison the entire German, Italian and Japanese population in the USA was wrong.

FDR did hold many opinions that we might term as Classical Liberal or Neoliberal today. However, the FDR administration is generally felt to have been the beginning of modern Liberal evolution (at least in the US, but we can be pretty ethnocentric). FDR started out with more Classic Liberal ideals, but evolved. So, no FDR wasn't a Neoliberal, the term didn't exist then, and as FDR's policies evolved, he left Classical Liberalism behind. FDR was a Liberal.

To some degree, in the United States, he's THE LIBERAL. Modern usage of the terms liberal and conservative may date from FDR's Administration. Both Parties claimed Liberalism before FDR, but as modern liberalism evolved to counter the social and economic problems of the Great Depression, those who held stubbornly to the failed policies of the past began to be called conservatives. During first 100 days of FDR's administration he instituted the business and financial regulations (like requiring businesses to do honest accounting and make their financial records available to stockholders, and offering insurance to banks if they promised not gamble with their depositor's money) which carried us through the next 40 years without major problems. In some ways, the S&L Crisis, and Great Recession can be explained as caused by the relaxation of those regulations by neoliberals (Deregulation) in the 1980s and 1990s.

One shouldn't attempt to apologize for the WWII internments, they were wrong. They were felt, at the time, to have been necessary, at least in the short-term. The US entry into WWII happened the day after a surprise attack on naval forces in Pearl Harbor, Hawaii by Imperial Japanese forces, and anti-Japanese sentiments were very strong. Even many otherwise fair minded people felt it was necessary to protect Japanese-Americans.

Some of FDR's racial policies were actually progressive for their time. He took steps to eliminate racial discrimination in government and government contracting.

No, FDR was not really a Keynesian. Acceptance of Keynesian Economics in the US came later. If anything, FDR's preferred balanced budgets. His Administration did run deficits early on, but he instituted programs to cut costs to try to balance the budget which may have lengthened economic recovery.

FDR was accused of being all those things, and groups from both the left and the right made arguments that had some appearance of truth. FDR was a Liberal. Maybe he was the first modern Liberal, but he was a Liberal. He never tried to overthrow Capitalism, he saved it from itself. He did reform some of it's worst practices, and address some of it's worst iniquities. FDR saw himself as a defender of Capitalism from competing systems of both the left and right.[1] FDR was liberal for his time.

On April 12, 1945, 82 days into his fourth term, Roosevelt was relaxing in Warm Springs, Georgia. He was having his portrait done when he grabbed his head and said "I have a terrible headache." He subsequently died of cerebral hemorrhaging. [2] He was succeeded by his Vice President Harry S Truman.

To millions of Americans, his passing was like losing a father. George Elsey, who had personally served FDR, commented in 2015, "Those of us close to him in the White House could not conceive a country without him."

His flag-draped coffin, carried on a black caisson and being drawn by a white horse, was driven through the streets of Washington DC. Along the route, thousands flocked to the tracks to pay their respects. People of all ages, race and creed turned up, many of them openly weeping.

Roosevelt was buried in Hyde Park, New York where he was born.

The 1936 Presidential Election, it is fair to say Roosevelt (blue) destroyed Landon (red) 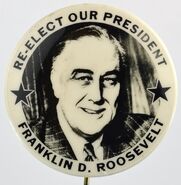 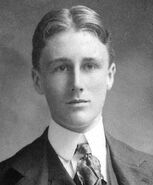