269 is a prime number that is half of 538. Since 1964, the total amount of electoral votes in America's Electoral College has been 538, which means a 269-269 tie is possible in a Presidential Election, although it has never happened.

As mentioned above, the electoral college can result in both candidates tied with 269 electoral votes. There is also a possibility that nobody reaches the 270 electoral votes required for victory due to a 3rd-party intervention. This has only happened twice in American history, in 1800 and in 1824. In 1824, third-party intervention prevented first-place finisher, Andrew Jackson, from taking the presidency. 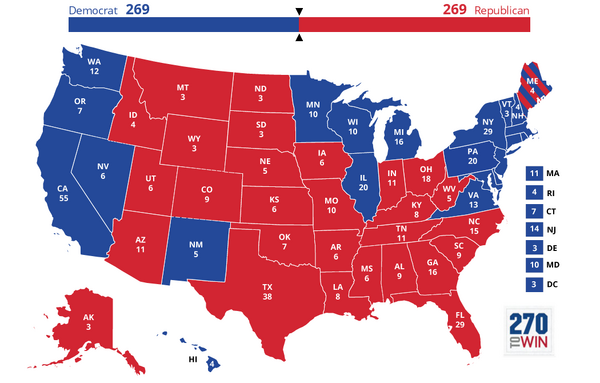 Pretend that the 2016 U.S. Presidential Election was altered, with Florida, Pennsylvania and Wisconsin voting for Hillary Clinton; Colorado and Virginia voting for Donald Trump; New Mexico voting Gary Johnson, and with no Faithless Electors. In this case, nobody wins the election immediately, as Trump only gets 269, Hillary gets 264, and Johnson gets 5. Alternatively, if New Mexico still voted for Hillary Clinton, it would be a 269-269 tie. This scenario is under the assumption that Maine still splits their vote, with 3 for Clinton and 1 for Trump.

For experimenting with this scenario or to use for referencing, use the 2016 Presidential Election Interactive Map. For other possible tying scenarios see Electoral College Tie Combination. This does not include options for New Mexico, Minnesota or Maine-Statewide.

Although no Presidential Election has ever ended in a tie, there is a tie-breaking procedure to determine the winner.

After the electoral meeting (mid-December) if the election is still tied at 269 or if nobody gets to 270 due to third-party intervention, the House of Representatives and the Senate determine the winner. The 435 (538 minus 100 Senators minus 3 more from Washington D.C.) H.O.R. members cast their votes choosing from the three candidates with the most electoral votes, while the 100 senate members cast their votes from the two vice-presidential candidates with the most electoral votes represented. So technically, Tim Kaine could have ended up as Donald Trump's VP or even Mike Pence being Hillary Clinton's VP. Whoever gets the majority out of the 435 H.O.R. votes become president.

However, if the 100 senators vote 50/50 on the VP candidate, the currently-sitting Vice President (in this case it would've been Joe Biden) would be the tie-breaking vote, finally putting an end to this mess.