Liberapedia
Register
Don't have an account?
Sign In
Advertisement
in: Politics and Government, US Politics, Change we need,
and 3 more 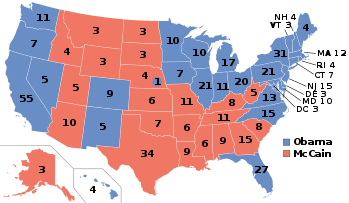 The 2008 US Presidential election took place on November 4th, 2008, the nominees for the two major parties were Senators Barack Obama of the Democrats and John McCain of the Republicans. It was won by Barack Obama who became the US President, as well as the first African American to hold the office.

His main appeal was change, inspiration, and hope, in the face of a vast economic crisis. He was also fresh with new ideas, as well as a welcome change from the 8 disaster years of George W. Bush.

She lost to Obama in the Democratic Primary, but she had three main weapons:

She is served as the Secretary of State under President Obama from 2009-2013 until being replaced by John Kerry.

His main appeal was keeping the failed policies of George W. Bush, putting people to sleep, and fear-mongering.

He was the Republican candidate. His choice for a running mate was Sarah Palin, which could put his judgment into question, as she was unqualified and an epic fail in general.

The famous ' klassic konservative'' kandidate, who appealed to.... umm.... something's gotta be wrong.... let's see.... DOES HE HAVE FLIP FLOP APPEAL?

The governor of Arkansas, a kooky Baptist preacher who wants to amend the constitution so it is in line with "God's word", despite having said he'd appoint an atheist to work in his cabinet. He now runs a talk show on Fox 'News'.

Ron Paul is a notorious cult leader who worships a warped view of the Constitution. By using the long-lost technique of calling Neocons idiots whose lack of regard for the Constitution borders on treason, his popularity skyrocketed among those who watched Fox News and had the brain capacity to use electronic devices, as he won every post-debate poll until he was banned from debates and the Republican Convention itself.

Ralph Nader, despite being a strong supporter of liberal ideas, is still remembered by many as the candidate who, back in 2000 U.S. Presidential Election, resulted in George W. Bush being elected in the first place. He would have been a decent president, but he just had no chance of winning.

Joe Biden His main appeal was experience, was a strong asset to the Obama campaign by;

Sarah Palin's main appeal was to female Republicans. She was chosen in an attempt by McCain to gain not only the Republican female vote but the female supporters of Hillary Clinton's primary campaign as well. However, this didn't work. Despite gaining a few female supporters, she hurt the campaign with;

Obama and McCain won the nominations of their respective parties. The candidates from other parties barely got a look from the American voting public, because America is chiefly a two-party state.

Obama was the winner of the general election on Nov 4th, 2008. It was a victory for Liberal values, sanity, and meant we didn't have to put up with a successor to George W. Bush.